The land of lakes and volcanoes

Some quote with photo 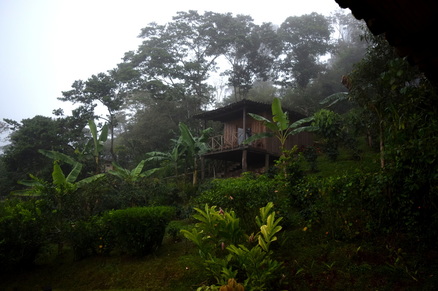 Friday, March 4th: The trip began with several days at the Finca Esperanza Verde, an ecolodge in the cloud forests of the San Ramon municipality, an area a little to the left of central Nicaragua. After a long day of travel, we arrived near 1 AM, and as I sleepily stumbled out of the bus, my legs cramped from my seat above the back wheel, I tried to orient myself in the darkness. The cool air smelt sweet and was throroughly refreshing. A creek trickled nearby, and the hum of a forest teeming with nightlife echoed from far away. I looked into the darkness, enjoying the calming ambiance but was soon distracted by the sky above. More stars than I had ever before seen blanketed the sky, stretching from horizon to horizon. It was breathtaking.
Saturday, March 5th: Our first full day in Nicaragua began bright and early with a 6:00 AM hike around the farm (Finca means farm). I excited to see our destination in daylight. The morning fog was thick as it rose up the valley.

This section of the trip was highlighted by mist netting, sloth spotting, water fall dipping, and vivid sunset watching. It was also at this time of the trip that we took a day trip into the city of San Ramon to learn a little about the local culture. We enjoyed a short walk around town before being treated to some cultural performances at the municipal library. And then, that night, we were taught how to make nacatamales, a delicious, traditional Nicaraguan meal. We moved on, visiting Selva Negra, Santa Maria de Ostuma, Volcan Mombacho, Las Playitas, Las Isletas, and Montibelli. The plant and animal species we saw varied greatly in color, size, and general peculiarity. Some of particular interest were the Red-Eyed Tree Frog, the Three-Toed Sloth, and the Royal Flycatcher.
The Red-Eyed Tree Frog especially drew me in; its bright colors were mesmerizing. Its top half was bright green, and its underside was creamy white with blue stripes between the front and back legs. Its fingers were sticky, orange, and almost Jell-O-like in appearance. The eyes, as its name implies, were the main attraction. They were bright red spheres that bulged out from the sides of its head. They were so large that I could easily see the thin veins running back and forth from the edge to the pupil, a jet black slit that beautifully contrasted the sea of red. I knew I couldn’t forget this moment and spent quite some time working on macro image that showed of the full beauty.
Zooming out, of the many places we visited, Volcan Mombacho especially stood out. Its unique forest is what made it my favorite location of the trip. The trees, kept short by the wind, grew twistedly in odd shapes. Thick, dripping moss and bright green epithets covered their trunks and branches. The epithets also grew along the ground, and we spent a good portion of our time searching through them for the Mombacho Salamander, one of the volcano’s endemic species. After walking a short while along the trail, we came to the rim of the dormant volcano itself and were able to look down into it. I probably could have stayed at that spot for hours, looking down the steep side of the tree-covered volcano.
While Mombacho was my favorite location, my favorite experience comes from a different place: Montibelli Nature Reserve. It was on the morning of our final full day in Nicaragua. After breakfast, I set out on a solo hike up to a view of Masaya, one of Nicaragua’s active volcanoes. The heat was stifling and the air was incredibly dry, but that only made the cool breeze and open view at the top all the more enjoyable. The flatlands extended as far as I could see, only interrupted by the smoking Masaya. After this, I continued up the mountain. As the trail got steeper and seemingly drier, the sun rose higher, and it grew even hotter. Dripping in sweat, I kept climbing until the trail finally opened out upon a second view of the flatlands. Standing there, I was completely alone and heard only the sounds of the mountainside: a few birds calling from far off, an iguana here and there rustling in the leaves, and the warm breeze as it whistled through the branches. It was extremely peaceful and serene.
Apart from enjoying the Nicaragua’s natural environment, I also found great interest in the people. I saw many different types of people, as you might expect. There were young children who shouted and waved as we drove by as well as teenagers who eyed us oddly, some with a half-smile across their face. There were those that were happy for our presence and eager to talk to us, but there were also some who seemed indifferent, and some who even seemed upset that we were there. However, in general, the Nicaraguan people whom I saw and spoke to were kind, generous, and welcoming. They also seemed happy, something that intrigued me most. It was not that I did not expect to see happy Nicaraguans, but I found it ironic that a people whose life many Americans might deem too poor to grant satisfaction, actually seemed to be so much more content then the well-off the United States. That’s my overall favorite part of traveling—seeing a different way of living, a fresh perspective on life. It’s motivating to step back and view things from a completely different standpoint and culture.
Looking back over the entire trip, I can think of one activity which I did not thoroughly enjoy. The whole experience was exciting, offering something new around every corner. Cold showers, strenuous hikes, bumpy rides on the back of truck—all these things made Nicaragua wonderful. There was nothing which I would now wish removed from the experience.
As I enjoyed the trip completely, it is difficult to think of any constructive criticism. However, I would have liked to get to know my classmates better before the trip began. There were some people I didn’t feel I knew until the end of the trip. Though this was partly my fault, I think something more involved than simple introductions could be beneficial. While I recognize this may be difficult to accommodate in light of all the presentations, I think it would be worthwhile addition to the class.
Traveling though out Nicaragua was an incredible experience. I learned how to handle birds, first removing them from mist nets and then taking various measurements. I learned what an active volcano looks like as well as forest covered dormant one. I learned about the some of the different environments of Central America, and I saw Red-Eyed Tree Frogs, sloths, monkeys, and more birds that I could count or remember—all animals I had never before seen. My biggest takeaway though, is the same thing I gain from every experience, a fresh view of the world, a new perspective, and a motivation to live life to the fullest.